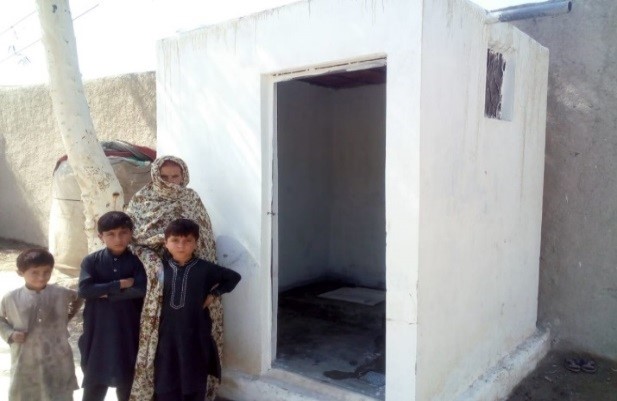 Miran Bibi 57, a returnee widow living in joint with his 2 sons, 5 grandchildren  and a daughter in law in a muddy walled house situated at the foot of a hilly terrain in village Ahmad Khel Miranshah-North Waziristan Tribal District (NWTD) Khyber-Pakhtunkhwa Pakistan. Her husband was a low scale Govt. servant. He was very devoted, patriotic and loved by all. He was the main bread winner for his family.

Three days before displacement her husband was shot dead by the un-identified men when he was on his way to home. This irreparable loss dazed and stunned the whole family, both of her sons become mentally retarded, her smiles turned into sorrows, the situation got worsened.

Shortly after incident the bereaved family left most of their belongings and migrated temporarily to the adjoining District Bannu (one of the districts of Khyberpakhtunkhwa) and settled with a land owner as peasants. Their mode of life got changed, their privacy got disturbed, they faced sanitation and other socio-economic problems, family children were unhappy as they lost their fellows company, her diseased sons were unable to work and looked for an outside help.

“At the time of exit we faced lots of hardships due security restrictions, lake of transport, and inflated fares, there was no proper arrangement for fleeing families, We left behind everything and escaped with just the clothes on our backs,” “I found it difficult to provide food and shelter for my families as I have already lost my husband-the sole bread winner for our family” said Miran Bibi

After registering as Temporary Dislocated Persons (TDPs) the family got relief in terms of food, and Non Food Items (NFIs) from various humanitarian agencies.

Miran Bibi turned her tears into strength to become a care giver for her family and started farm and off farm activities. She owned a home based grocery store at the area of displacement and struggled hard in fulfilling her household consumptions.

On return to their place of origin the widow found her home in a very bad condition, Most of their valuables were missing and even the doors were not spared, two rooms were fully damaged.

PRDS started the implementation of 8 months project titled “WASH and Shelter Humanitarian Response Project” in 5 villages of NWTD in collaboration with Care International in Pakistan (CIP) with the financial support of OFDA. The village Ahmad Khel in Tehsil Miran Shah was one of the village targeted by the project. The project was specifically targeting the extremely vulnerable households to ensure protection of women, girls, Person with Disabilities (PWDs) and other vulnerable individuals.

Miran Bibi and her family faced various hardships upon return to their original place due to damages their house, loss of valuable assets and livelihood. Limited living space was available in the house. The whole family was lived together in one room for a period of one and a half year. Safe and clean drinking water was not available, children were asked for fetching water from the nearby area. The whole family was used to open defecation practice as the space was readily available to defecate in.

The family is now living in the shelter constructed with project support and using improved sanitation facility and safe and clean water for drinking and other purposes.

“Before now we used the bush as our toilet and we only used to go at night or very early in the morning so no one would see us. We got cuts and injuries. We were afraid but what choice did we have? It was not a good thing at all and I felt ashamed” Miran Bibi said

“I was happy when I heard I would be given a toilet. It meant I would not have to go to the bush but have the privacy to defecate in my own house and without walking a long distance or facing risks in the bush. My family is safe now. “I love my toilet. Not too many people around this place have it and it makes me feel special. I keep it clean very easily with very little water” widow added.

“I am very happy with the way PRDS team treated us, they dealt us with no boundaries. Thanks to PRDS for providing me safe drinking water, latrines and shelter material, now my family is safe, our dignity and privacy is restored” widow added with tears glistening in her eyes.